For over a year it has been observed that some animals are being infested by ticks to a level raising concern. Some animals if not spotted early and early treatment instituted death is inevitable. Kigio W.C. is the home of endangered Rothschild giraffe where it thrives very well. Severe tick infestation was first noted in elands’ ears. Later it was noted in few common zebras. This was last year during dry period. The severely infested ones were either euthanized if spotted late or found dead. The ones spotted early were treated and recovered. This year as dry period seem to set in due to long rain failure tick infestation has resurfaced this time on common zebra. At least one case has been witnessed in month of July.

It has been observed that the infested animals suffer immensely both socially and physiologically. Animals become isolated from the herds, they become partially blind ramming into objects resulting in self-inflicted injuries, organ mutilation especially ears, circling, inco-ordinated movements, loss of balance and gait, listlessness, frequent head shaking and ear flapping, plunging into gullies/gorges.
The infestation leads to wound myiasis particularly of the ears. Severely infested individuals are euthanized while less infested animals are treated but left with deformed organs especially ears.

It is feared that with increased tick population and as different animal species are infested it will be disastrous if Rothschild giraffe is infested. Intervention can be put in place to reduce tick population to tolerable levels

1.The conservancy to construct a dip and establish/introduce a herd of cattle. Cattle will help to collect ticks as they graze within the conservancy after which they will be dipped in plunge dip. With effective dipping regime tick population will be controlled in a repetitive manner probably weekly.
2. Alternatively community around the conservancy could be allowed to graze in the Conservancy. This must run concurrently with effective dipping regime within the community or otherwise the conservancy to have its own dip in which community cattle will be dipped.
3. Burning is another way but with unpredictable rainfall amount and its poor distribution this will affect pasture regeneration time and thus it is not preferred for the time being.

BRIEF ON SNARING STATUS WITHIN NAIVASHA 2014

BRIEF ON SNARING STATUS WITHIN NAIVASHA

Naivasha and its environs have big populations of both wildlife and human. Virtually almost all wildlife is in private land except state owned Hells Gate and Longonot National Parks without forgetting Game Farm which is under KWSTI. There are three water bodies within which are fresh water Lake Naivasha and two non-fresh water Lakes Oloiden and Crater Lake. Lake Naivasha has been emptying /overflowing into Lake Oloiden changing its salinity. Animals can move all over the area either on land or water. There is a lot of farming activities both commercial and peasant. Among the farming activities on large scale are floriculture, livestock ranching and tourism. Small scale farming activities include peasantry and herding. Huge human population and ever growing farming activities has encroached into wildlife habitat leading to increased human wildlife conflict.

The most snared animal is common zebra. Others which form the list but on lower degree are buffalos, impalas, Masai giraffes, hippos, elands, waterbucks, warthogs, Thompson gazelles and Wildebeest. Animal behavior and anatomy plus economy factor has been linked to the snaring menace in Naivasha
The commonly used snaring tool is wedge wire. Also on minor use are plain wires, nylon ropes/strings, rubber bands and dug outs. These wires are sourced within the area. The wedge wire is easily available considering its use in greenhouse construction. It is also available in shops in Naivasha town. Plain wire is also easily available since most of the farms are fenced using it. It is also available in hardware shops within town. Rubber bands are commonly used in flower farming business as binding/holding/parking tool. It has been encountered but it has been thought to be accidental.
Wedge wire is preferred because of its strength as it is braided and does not break easily. It is favored for zebras and buffalos. Though a times plain wires are also found on these animals it is assumed that they are not generally meant for them. Plain wires are common and successful in small animals.
Dug outs have been used to trap hippos and zebras.

1. The high interaction of human beings and wildlife. People live in close vicinity of wildlife
2. The high population of human beings and wildlife. Both are contributed by constant bleeding on a fixed resource-land which is rather diminishing.
3. As farming activities increase there is rural to urban migration to cater for human resource demand.
4. Increased constructions as the population must be housed, more cultivating lands and geothermal wells are opened up leading to increased pressure on land with eventual encroachment to wildlife habitat. Migration /movement corridors/pathways are impinged into. This increases human-wildlife conflict.
5. Natural factors. Snaring has been noted to escalate during dry spells as animal move to look for fodder/pastures in the surrounding farms. Also increased volumes of surrounding lakes have led to reduced dry habitat for terrestrial animals as water overflow on land.
6. Economy factor. Ranch owners allege that wildlife animals’ populations have grown to levels beyond their land carrying capacity. This has led to stiff fodder competition between their cattle and wildlife and are inconstant push for wildlife populations to be managed by government the best way there is. Best examples are Sanctuary Farm, Soysambu conservancy, K.A.R.I-Naivasha and Aquila Farm. These have been snaring hot spots for over the last two years. Managements of these farms are bitter about wildlife populations to a point where they don’t care about what is happening especially about snaring. To them snaring seem to lower populations thus boosting their economy.  They wish it could be there heavily and regularly as personally witnessed some say. It is within same locations where some intelligence point to a commercial network of game meat business. Some have even yielded to positive arrests, successful convictions and sentences. Lack of sustainable employment among large population also results to engagement with wildlife thus increased snaring.
7. Existence of commercial game meat business network. Unconfirmed Intelligence gathered point to a well-organized network with poachers on the ground, a transport team and selling points/outlets. A zebra carcass can go for at least 20,000/= and a buffalo for 80,000/=. This entices the poacher to engage at any level, at any farm using any means possible to get carcasses. These activities can be strategic like end/beginning/middle of the months or sporadic. Initially they could debone but of late they are carrying boned meat.

Approaches used to intervene
1. Gather necessary information through desnaring/treatment interventions and share it with relevant organs. This has constantly been shared with Investigation team- Naivasha KWS Station, Warden Naivasha Station, Fisheries Naivasha Station, Hells Gate National Park, Lake Nakuru National Park
2. Collaborate with other Non-governmental agencies that help in desnaring exercise, spotting animals in need and gathering relevant information on animal welfare. Such include Born Free Foundation and ANWA that visit Naivasha area regularly for the same.
3. Create awareness as we carry out our veterinary interventions to the community around Naivasha on welfare of animals, dangers of game meat consumption, New Wildlife Act- its punitive measures and need to disseminate information on any animal welfare matter.
Some of the evidence that commercial business on game meat is real

A). No. of cases attended per species 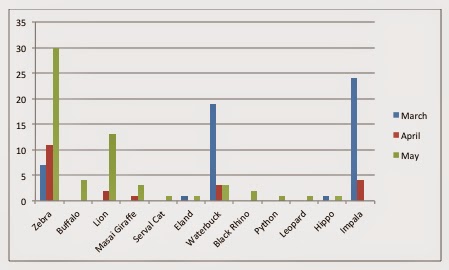 B). No. of Cases Attended Per Locations 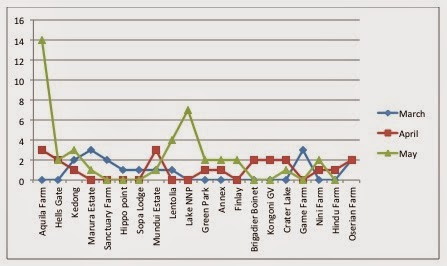 C). Types of Cases Attended to 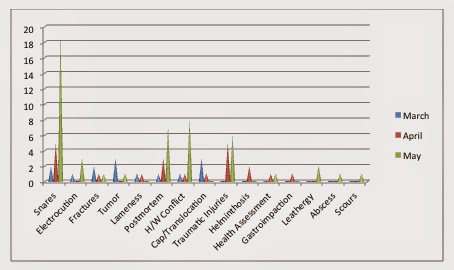 Note: There has been a shift of snaring activities from eastern side of Lake Naivasha to western side for the last three months after the latter remained dry and dusty resulting to increased conflict.

This is a repetitive scenario in some of the noted hot spots. Repetitive in sence that it happens during the dry spell. It is a reality case noted on 6/6/2014 at KARI-Naivasha. The same case has been noted at Sanctuary Farm and adjascent Crescent Island. Exacebating factors being high wildlife and cattle populations, dry weather, heavy land pressure, Lake swelling, disgrantled management among others.
Something need to be done to counter the scenario.
Posted by Unknown at 09:06 No comments: